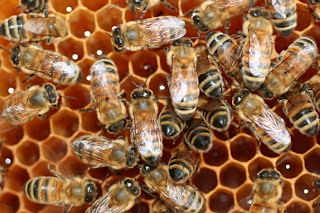 I've only bought 3 things off Craigslist in my life. Ranked from great to terrible they were: 1) a 1998 Dodge Ram Pickup 2) a microwave oven and 3) two beehives. Guess which one I'm going to talk about today.

It was late in the season when I noticed the ad. Fall was approaching and I wanted to enter the next spring with a couple more colonies. And since the apiaries had been sold out for several months, my options were limited. I called the seller and he agreed to sell me two colonies. Further, he lived close to my dad's house, which is where I intended to set up the hives. I got directions to his house and set up a time to meet. Things seemed to be falling into place.

When I found my way to the end of the long driveway, I immediately knew my run of good fortune was about to come to an end. I counted 8 cars and a box van. Not one vehicle looked to be in operating condition and they all appeared to have had their windows lowered for several years. Then there was the grass. If you ever wondered if fescue could grow over 4 feet high...it can. Fortunately, someone had mowed a haphazard path through a portion of the grass to make access to the house possible. I phoned the owner in the hope that I'd come to the wrong house. Unfortunately, his directions were spot on and I was in the "right" place. And to make matters worse, he was less than a minute away, so there wasn't much chance for an escape.

After the seller wasted about an hour shoe horning himself into an ill fitting bee suit and making some entrance guards out of cardboard and mesh, we proceeded to his bee yard. I asked him if he'd forgotten to bring his smoker and he informed me that he didn't like smokers as if using smoke was some kind blemish on the practice of traditional beekeeping. I'd have taken the time to tell him that wall paintings dating back to 1450 B.C. depict ancient Egyptians using smoke to drive bees away for the purpose of harvesting honey, but it was already getting dark and I wasn't in the mood to argue.  I assumed that he had already prepared the hives he was going to sell me, and all we had to do was attach the entrance guards and move them to my truck. And since darkness was all but upon us, meaning all the foragers had returned to the hives, colony strength would be very strong. For a brief moment, I thought my luck was starting to turn. I was wrong.

When we got to the bee yard, flashlights were already needed. I shined the light around and all I could see were large established hives 4-5 boxes high. I wondered where the 10 frame brood boxes I had come to purchase were. In a "gee, I must be blind" manner, I asked where the hives he was going to sell me were located, hoping they were right under my nose and I just wasn't seeing them. He told me he was going to split them off of two of the larger hives. A split is when you take frames of bees, brood, honey and pollen from one colony and put them in an empty hive body. After a few days, the worker bees will realize they have no queen and set about raising a new queen. You can also introduce a new queen yourself. Now that's all fine and dandy, but I wasn't standing in the dark holding a flashlight and a hive tool with this moron so I could watch him create a twilight colony split. So I asked rhetorically if he intended to sell me a hive without a queen. "Of course not" he said, "I wouldn't sell you a hive without a queen". Um...yeah ya would. But more on that later.

He dove right in, dismantling the first hive, then the second. Bees, who I mentioned earlier had all returned from the field, were boiling out everywhere. And since "the naturalist" was averse to using smoke, there wasn't anything to discourage the bees from an all out assault on both of us. Although not for lack of trying, the angry bees weren't having much success in getting any stings in me. I shined the flashlight like a pro back and forth between frames and tools wishing he would work a little faster as I was beginning to get covered up. It's hard enough to locate the queen in broad daylight, and damn near impossible in the dark, flashlight or not. So his method was to locate an area where fresh eggs had been laid and decree that the queen must be on that frame. After a traumatizing half hour, which seemed like 3 times as long, I strapped down the two new "hives" in the bed of my truck. All I had to do was settle up and get the hell out of there. I took my gloves off so I could get my keys to unlock my truck where my wallet was safely locked. However, I failed to realize that 10 or 12 bees had entered my pocket in the hopes of finding a tender spot to sting me. Suffice it to say that they weren't very pleased with me when I jammed my hand in amongst them. I let out a yell and yanked my hand out of my pocket to find no less than 5 of them in a firm grip on my fingers, stinging in unison. I feverishly shook my hand to get them off and scratched out the stingers. My hand was already throbbing as I counted out thirteen $20 bills. He bid me farewell and I promised myself if I ever saw him again, I was going to punch him in the ear so hard that he wouldn't be able to hear for a month.

I was still covered in bees, so I kept my veil on as I sped down the back roads toward my father's house. I looked at the clock and it was almost 10pm. I phoned my dad and gave him a brief heads up in a conversation that pretty much consisted of the phrase, "I seriously don't want to talk about it right now". I managed to hurriedly place the hives in the bee yard and went home to pour some moderately priced scotch on my nerves.

The next day, I went out to see how things looked in the daylight. Despite the bumbling fashion in which the transaction went down, I was hopeful that, in the end, I'd gotten what I wanted. I went into the first hive and started searching for the queen. The good news was, I found her on the bottom board. The bad news was that she appeared to be the wrong queen. I'd later find that apparently, the genius had mixed up some frames during the split and the queen had been attacked as an intruder as she was lying in an insect fetal position twitching as two worker bees were nudging her. I hoped I had inadvertently rolled her during my inspection, and maybe she'd be ok in a few minutes, so I'd turn my attention to the other hive. My hopes were dashed in a few minutes when I noticed that the worker bees had pushed her out of the hive and onto the concrete pad just before I accidentally stepped on her. Yeah, she wasn't getting back up from that one. I began inspecting the other hive, again, looking for the queen, but was unable to locate her. However, not knowing the apparent mix up, I was hopeful that I had just been unable to locate her and she was indeed inside. 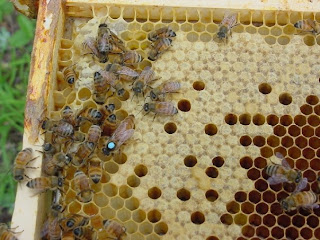 A frame from one of my other hives. The big girl with the blue dot is the queen.﻿

The first hive I inspected was pretty weak and didn't have many bees. Plus, I'd already squashed their queen, so I decided to combine the two hives by stacking the hive bodies on top of each other with a piece of ventilated newspaper between them. This is an old method that I've used before with success, and I figured this would give me at least one strong hive while I figured out my queen situation. I gave them a couple of days and went back for another inspection. When I opened the hive, most of the bees in the upper hive body had absconded and the rest were dead. Further, the frames had been overrun with small hive beetle larvae. The newspaper should have been chewed away, but fortunately, it was still intact, which had kept the beetle larvae from getting to the hive body below. I immediately trashed the upper hive and inspected the lower. Any hope that I'd missed finding the queen was eliminated by the existence of several queen cells. 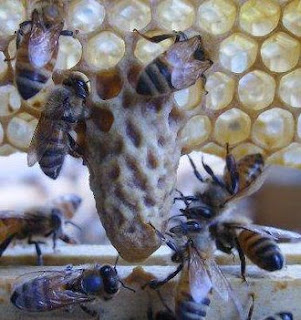 Queen Cell from the Craigslist disaster
I ended up letting the bees raise a new queen rather than trying to order a new one. Above is a picture of this very hive and the queen cell from which the hive's new queen would later emerge. In the weeks that came, I began feeding the colony non stop and later found the new queen had emerged, left the hive to mate and managed to find her way back. We're now half way through winter and the little colony seems to be making it through. In the end, I learned a valuable lesson about buying bees, but I was also reminded how the instincts of the honey bee trump man's intervention when it comes to colony survival. We truly need them more than they need us.

If you'd like to be notified of updates to my blog, please email me at beeswax@teezbees.com. I promise your email address will not be shared with anyone.