I hate beetles. Whether it was being forced to scatter a nylon stocking full of Sevin Dust as a child to kill Japanese Beetles, or, as a teen, feverishly pumping the brakes to stop my '72 VW Beetle...they've plagued me my entire life. These days, the only beetle that's got me up nights is the dreaded small hive beetle (SHB). This nemesis to the honey bee is so tormenting that I'm convinced that if Pharoh hadn't thrown in the towel, the SHB would have been the 8th plague. These little miscreants decided to pick a fight with me last year when they destroyed a nucleus hive that I started. Then, they doubled down when they took over a hive that I bought from an apparent hoarder (see The Worst $260 I Ever Spent). I'd say they've thrown down the gauntlet.

What Are These Things?
Small hive beetles are native to Africa, and first made it to the shores of the US in 1996. Like many hive predators, they fly directly into the hive entrance, but due to their small size & hard shell, guard bees are unable to kill or expel them from the hive. Don't get me wrong, a strong hive can keep them on the run and pretty much deal with them, but a weak hive or a hive without enough bees to cover all of the comb can be destroyed quickly. The beetles themselves aren't the issue. It's their larvae that is so destructive. A female beetle will gain entry to the hive and if given the opportunity, will lay her eggs in cells of uncapped honey. Once the eggs hatch, the larvae feed on the honey and then...well, they dootie in it (I just said dootie). This unsavory act causes the honey to ferment faster than Popcorn Sutton's (R.I.P.) mash and begin oozing out of the hive. Then the larvae exit the hive and burrow in the ground to begin their metamorphosis into an adult beetle to begin the cycle again. Understandably, the bees will reject the hive and abscond in search of another home if this happens. 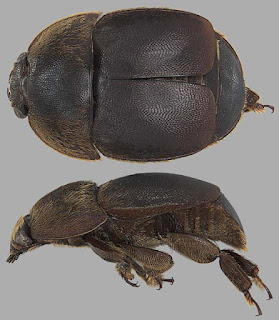 How do you get the upper hand?
As was common beekeeping practice, the use of approved chemical pesticides inside and outside the hive was the initial method prescribed for controlling the beetles (there are other more aggressive treatments that I won't go into because I think they are grossly irresponsible). However, more and more, the beekeeping community is abandoning chemical treatment as the initial form of pest control in favor of integrated pest management (IPM). IPM has a goal of significantly reducing or eliminating the use of pesticides while at the same time managing pest populations to an acceptable level. In beekeeping, choosing strains of bees with genetic resistance to certain pests and disease and the use of nontoxic substances to keep pests below treatment threshold levels are methods of implementing IPM. Only after a treatment threshold is reached, are chemical treatments used in order to save the colony from collapse. I like this line of thinking because if at all possible, I don't want any substance inside my bees' bodies that I wouldn't want in mine. So for me, chemical treatments have no place inside my hives unless the colony's survival depends on it.

Albeit satisfying, a thumb pressed firmly against the body of a small hive beetle until it is squashed as flat as a pancake while screaming, "Die you damn dirty beetle!!!" isn't the most efficient form of IPM. Rather, the use of traps containing vegetable oil have shown the most promise in dealing with them. The most effective traps have been those which utilize a screened bottom board with either #8 or #6 galvanized hardware cloth with a tray of vegetable oil underneath. As beetles are chased by guard bees, they fall through the screen and into the oil where they die. Some research suggests that used vegetable oil also serves as an attractant to the beetles, but it also attracts scavengers like skunks who love the nummy left over fish fry or tater tot oil. I don't currently use oil pan traps, but I plan to do so this year.

﻿
﻿ There are also a few traps used inside the hive. The Hood Trap, developed by Dr. Mike Hood of Clemson University, uses a 3 chambered container attached to an empty frame. The two outer chambers are filled with vegetable or mineral oil and the center chamber is filled with cider vinegar as a means to attract the beetles to the trap. Then there are the traps that fit between the frames. These include the Cutt's Beetle Blaster (warning: site contains music), AJ's Beetle Eater, and the Beetle Jail Jr. I personally prefer the Beetle Jail Jr. because it incorporates the three chamber design that the Hood Trap does without using up a frame space.
﻿
﻿
﻿ ﻿But above all, a strong colony is the best first line of defense against the small hive beetle. However, I think strong colonies benefit from using the traps. I mean, I'd rather have bees making honey rather than chasing and cleaning up after beetles. But if you live in an area where small hive beetles are prevalent and have a weak hive or possibly a newly established nuc, do yourself a favor and invest in some type of beetle trap to give the bees all the help you can in defending against these aggravating little twerps.

If you'd like to be notified of updates to this blog, please email me at beeswax@teezbees.com. I promise your email address will not be shared with anyone.